BaconFest 2011 sold out in mere minutes, leaving hundreds of bacon lovers crying into their blood pressure meds. Denny's to the rescue! The (I can't think of a positive adjective) restaurant is celebrating Baconalia, their annual bacon celebration, by hosting a sweepstakes with the grand prize of two VIP tickets to Chicago's Baconfest. Visit www.facebook.com/Denny's to enter.

Unfortunately, if you win second prize, you're stuck with a $100 Denny's gift card. I'm sure you can find someone you don't like to give it to....

I, however, won't be entering the contest because I GOTS ME A TICKET! I signed up early and hit the 'refresh' button a hundred times at 8:59 a.m. the day the tickets went on sale. On April 9 I will don the fat pants for a day o' bacon. Stay tuned for photos.

In the meantime, feast your eyes on this recipe for Bacon Cups. AMAZING! 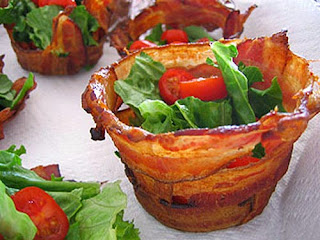 I typically hate everything about the suburbs, but Northbrook just won some points.

Northbrook man’s foreskin-restoration business to be featured on TLC
Mar 28, 2011

Ron Low is in the business of foreskin restoration. Yes, foreskin, the stuff that covers the head of a penis unconquered by circumcision.
One might think that once foreskin is gone, it can’t come back. Like virginity. Or John Edwards. That would not be entirely true. Low, of Northbrook, said the little turtleneck-like collar of foreskin left over behind the penis head, as well as some of the shaft skin, can be stretched to approximate the real thing.
“Foreskin has the highest concentration of pleasure-receptive nerve endings, and it can serve as protection for the glans (penis head), keeping it moist and supple rather than dry and toughened,” said Low, 48.
Stretching a winky’s skin tube doesn’t recreate any lost nerve endings, but Low says it allows the skin to move more during sex, which makes it feels like it does.
Low (pronounced Lau) says he does business in 50 countries, though two-thirds of buyers are in America.
He apparently sells enough to support a family of four. Three years ago, he quit his job as an industrial engineer, and his wife, Alice, quit hers as an accountant to help out.
“I help about 10 men per day start restoring their foreskin,” Low said, calling from the nerve center of TLC Tugger, his Northbrook house.
That 10-a-day rate may soon rise. He and his company will be featured on the first episode of “Strange Sex,” a TLC show airing at 9 p.m. Sunday. There is no relationship between the TLC the network — The Learning Channel — and TLC Tuggers, in which the initials stand for Tapeless Conical Lengthening.
Low and TLC Tuggers will share the half-hour show with a segment on a woman who has two vaginas.
You can find Low’s business at tlctugger.com, which sells a couple of soft silicone cones he designed that combine to clamp the foreskin after it’s been stretched over the glans.
The cones are attached to a strap that loops around the leg near the knee, or over the shoulder, Low said. Or you can clip on a weight of between 5 and 15 ounces, and let gravity do the tugging.
How much weight?
“You add weight until discomfort starts to set in sooner than 4 hours,” Low said.
Why four hours?
“After 4 hours, you take a break, then use the toilet,” Low said.
“Tugger guys are toilet stall guys, not urinal guys,” he added. “You need to harangue this elaborate equipment in your pants.”
All this for $60, delivered.
It sounds better than what Low first bought for himself about 10 years ago. It had straps, adhesive tape, and a 35mm plastic film canister instead of soft silicone.
Got a picture in your mind? No? That’s what makes cable television the wonderful thing it is.
Users shouldn’t expect to get their tugging finished over spring break. The “device is guaranteed to work for a year,” Low said. “Most do not need another device — they can tug for four years and then be done.”
Low himself wanted to get the job done because as time went by, his manly instrument was getting less sensitive.
“It used to be that sex with my wife took a very long time,” he said. “If I wanted to finish, my wife would get sore.”
Some people may not look at his situation as such a predicament. He understands.
“You might think that being able to have sex for a long time would be a big advantage,” he said. “And there are certainly good things to say about it. But I still have sex as long as I like, and when my wife is ready, so am I. She’s able to enjoy the whole ride instead of just tolerate it.”
Low is big in the outlaw-circumcision movement, saying parents don’t have a right to make the decision for a child. He thinks claims of better health and hygiene for those who are circumcised is bunkum.
“We clean our genitals for the same reason we clean our armpits — for social reasons, not for health reasons,” he said. “You would no more clean inside a foreskin than you would inside an eyelid.”
Posted by Andrea at 1:38 PM 2 comments

I'm completely obsessed with the Chicago burlesque/pin-up scene, and Love Lulu Mae is an essential accessory to complete your vintage look. Each piece is designed by Chicagoan Agnes B. Miles using antique jewels, vintage fabrics and exotic feathers. 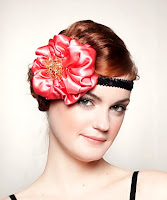 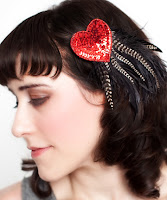 If you're looking for that perfect bridal headpiece, check out the Wedding Bells collection or contact the designer to have a custom piece made. I love this romantic birdcage veil. 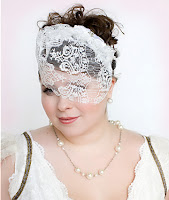 In addition to being fabulous, Love Lulu Mae is environmentally-friendly and charity-focused. Hat boxes and tissue paper are made with recycled materials and most feathers are collected from various farms, including local ones. (Don't worry, they're cleaned.) And when you purchase from the Love Lulu Mae website, five percent of the sale is donated to the National Multiple Sclerosis Society of Chicago.

You can pick up one of these creations either online or at boutiques around Chicago, California or New York. And I highly recommend following the Love Lulu Mae blog for delighful takes on vintage-esque fashion.
Posted by Andrea at 9:39 AM 2 comments

For When You Need to "Throne Up"

Priceless!!! If I were a Brit I'd probably be so annoyed by all the royal wedding hype too. British graphic designer Lydia Leith has created this perfect addition to your Will & Kate collection.
Introducing the Royal Wedding Sick Bag, available in bold shades of blue and red. If you find yourself feeling a little nauseated on April 29, just reach for one of these bad boys. 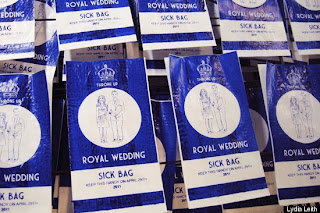 Chicago is starting to come out of hybernation, and pretty soon the weekends will be packed with more happenings for one blogger to handle. So, every Friday I'm going to put together a little weekend round-up of some of the most interesting and atypical events around the city. Ch-ch-check it out:

International Tom Hanks Day @ Fizz Bar & Grill - March 26 from 12:00 - 6:00 p.m.
Who doesn't love Tom Hanks?! Fizz will host the the annual International Tom Hanks Day, an event featuring screening of the Hanks classics, music and a raffle of the actor's memorabilia. Founded by Chicagoan Kevin Turk, the day originally began as a Tom Hanks movie marathon at his house. The event grew each year, and Turk decided to create a charity event, donating proceeds to Lifeline Energy, one of the actor's favorite charities.

National Paella Day @ La Taberna Tapas on Halsted - March 25 - 27
Get your paella on with two events at La Taberna: $18 paella flights and a Sunday afternoon paella cooking class that includes sangria and recipes card. Call for a spot in the cooking class.

International Vintage Post Fair - March 25 - 27
Time to chuck that Led Zeppelin poster and check out a selection of over 10,000 originals from the 1890s through 1980s. This year's featured exhibit: "Sex Sells!"

And don't forget to turn off your lights!

*I realize that this is a terribly uncreative title, but I have really bad cramps right now. I'll do better next week.
Posted by Andrea at 8:43 AM 1 comments

I try to be as environmentally concience as I can, but it's not easy for a city folk. Especially for one who loathes those ugly CFL or LED bulbs. (I have yet to find one that doesn't make me feel like my retinas are burning!) Well, on March 26 at 8:30 p.m., I'll turn out my power-sucking lights and feel like I made a difference? Why? Because it's Earth Hour!

Earth Hour is a global event led by the World Wildlife Fund (WWF) to raise awareness about climate change by asking the world to turn off the lights for one hour. Earth Hour, presented locally by ComEd, will take place March 26 at 8:30 p.m.

This event has major participation every year. Buildings and landmarks around the world go dark, and there are tons of events in Chicago to help you celebrate. For more info, follow Earth Hour Illinois on Twitter @EarthHourIL. 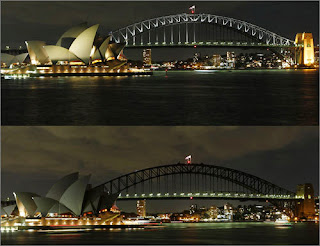 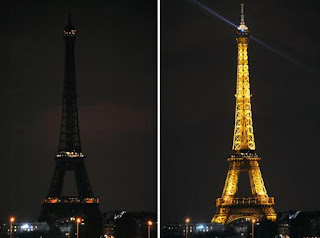 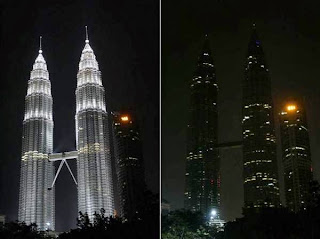 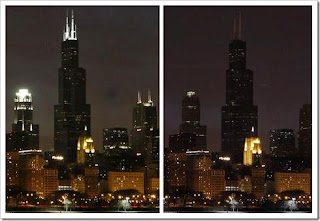 Email ThisBlogThis!Share to TwitterShare to FacebookShare to Pinterest
Labels: Give a Hoot Don't Pollute

I'm back from my awesome honeymoon, and I wanted to share a few tidbits I learned a lot about Italy's gorgeous cities:

"Grazie" is pronounced Gratzie-eh, not Gratz-e. When you say it wrong, they judge you.

When you're visiting the Vatican, and you want a delicious lunch, don't go to the Vatican cafeteria. More specifically, don't try to order meat when you're at the cafeteria on a Friday during Lent. Again, they judge you. And then give you half-frozen spinach.

Women's bathrooms don't have toilet seats. Be prepared to hover.

Get used to random vendors saying "Hey guys!" to you constantly. Apparently they believe this is the quintessential American phrase.

All of the best places to eat are away from major tourist spots. And just because a place is cheaper than others doesn't mean the food won't be as good. Some of the best meals we had were from middle-of-the-road restaurants.

If you see a fat person, a loud person or a poorly dressed person, it's almost certain that they are American. You will become embarrased by your fellow countrymen.

I had an amazing time on the trip, but I missed my Chicago. Glad to be back! :)
Posted by Andrea at 9:29 AM 3 comments

Email ThisBlogThis!Share to TwitterShare to FacebookShare to Pinterest
Labels: Italy

The Chicago Quirk is going to take a little blogging hiatus to get married in in the Virgin Islands and then honeymoon in Italy. Stay tuned for a Flickr stream of obnoxiously awesome photos and posts of even more fun stuff happening around the Windy City.

Until then, here are a few of my favorite Internet gems:

This is Why You're Fat

Hyperbole and a Half

My Spoon is Too Big
Posted by Andrea at 9:58 AM 6 comments