I feel like I'm perpetually apartment/house hunting even though I have absolutely no need (money) to move. For the most part I don't trust any sort of apartment hunting service, but I'm a fan of Domu. I check out the site and follow them on Twitter, but I recently found a bonus on their website; a Chicago History Maps page that points out landmarks and historical sites in every neighborhood.

As much as I love my neighborhood, East Lakeview, I figured not too much history took place here. But I looked it up and found some great tidbits:

The Jamba Juice at the corner of Clark and Diversey was actually a jazz club called The Rendez-Vous Cafe. Famous jazz musicians played here and Louis Armstrong even recorded records in the back room.

The L&L Tavern at Clark and Belmont, a place so divey that even I haven't gone in, was one Jeffrey Dahmer's favorite bars and John Wayne Gacy once stopped by in full clown costume. Is it sick that this place is now at the top of my list?

Apparently Jack's on Halsted used to be the Helmand restaurant, a restaurant owned by Afghan President Hamid Karzai and his brother, Ahmed Wali Karzai in the 1990s.

Check out your neighborhood. Find anything interesting? 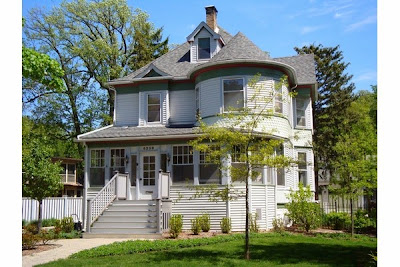 By the way, this is my current dream home.﻿
Posted by Andrea at 7:03 AM