"Xtreme Trampolines" or "How to Feel Old on Your Birthday"

I've been a busy busy Chicago Quirk lately, but I have lots more activities and venues to tell you about.

Friday night was my friend's 29th birthday, and she decided to go to Xtreme Trampolines. Yes, another suburban venue, but, alas, it seems that most of my friends have migrated out to suburbia.

I had to pick up the husband from the train before we went over, and fortunately the station was right next to Lilacia Park. I was worried that the weather would have a negative effect on the precious lilacs, and unfortunatley it seems that it has. There weren't any lilacs in bloom! The Lilac Festival runs throughout the month, so hopefully the little guys will perk up. There were some other pretty flowers though: 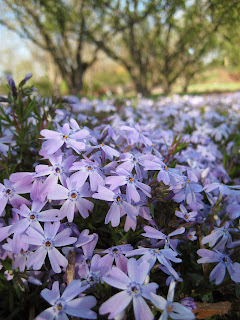 On to Xtreme Trampoline. This place is nuts. 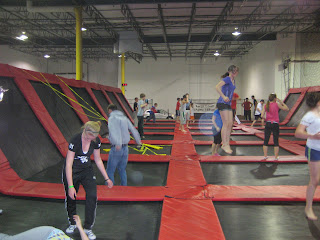 This trampoline Mecca was littered with sweaty high schoolers flipping in ways that would snap me in half. Observe the photo below of the kid flying through the air.
﻿﻿
﻿﻿What I couldn't get on camera was this kid landing on his feet, going into a back flip and then bouncing to the other side and doing the same thing. I would get severly motion sick if I tried that. I pretty much just jumped up and down the whole time. 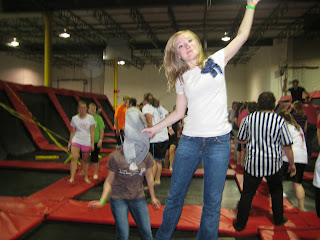 I could kick myself for not taking pictures of the foam pit. There's a section of this warehouse-like space that has two rows of trampolines and then a massive pit of foam cubes. It looked soooooo much fun! That is, until you're actually about to hurl yourself in. My flight or fight instinct kicked in the minute I was in the air and I sort of cat-twisted into the pit. I landed on my back and couldn't get up. After flailing around like a upturned beattle for a few minutes my friends had to pull me out.

We lasted about a half hour here. (You pay by the hour, but I don't know how they monitor that since they turn you loose the minute you pay.) The problem was that it was so filled to the brim with teenagers showing off and having their own dramatic moments that we felt out of place. I started to feel really old and uncool until one of my friends reminded me that we didn't need to hang out there; we could go buy alcohol.

All in all, this place could be a blast if they had an 18 and over night. Otherwise, I don't need to go back.
Posted by Andrea at 1:05 PM